One of the most beautiful public nude statues "The Last Dryad" by Alexander Sterling Calder is located in Berkley, on the university campus. It is not easy to spot, and there is a good reason for this.

The statue was cast in 1926, and donated to the University in 1948 by the sculptors wife. The administration decided that the students would have too much fun seeing the statue, and placed it in an inner courtyard of the Women Gymnasium.  After 20 years of relative exile, the Dryad was moved to it's current,  a little bit more public,  location - only after the donor's inquiries. 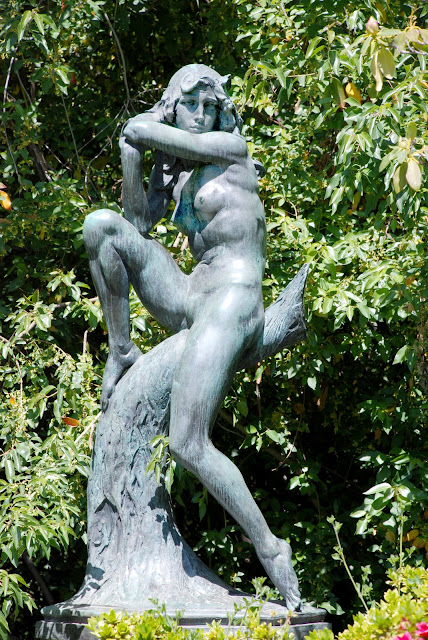 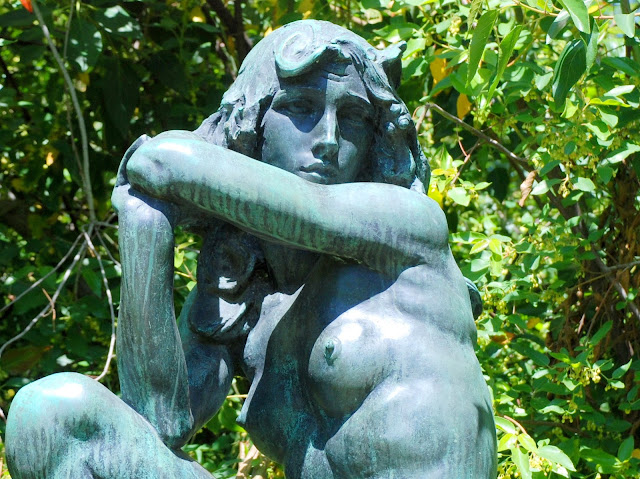 There is some suspense surrounding the creation of this sculpture. 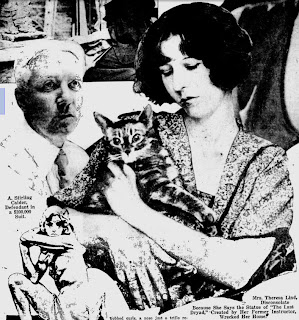 According to an article in "The Evening Independent" of August 17, 1923 a young art student Theresa Levy posed for a head sculpture for  her instructor Calder.  The sculpture "Little sister of Tragedy" was very appealing, and was widely exhibited. A year later Theresa married to Charles Lind, a conventional-minded young man. We can imagine his shock when he saw a photo in a magazine of a  sculpture called "The Last Dryad", and recognized his wife - all naked and exposed to the public eyes. He in fact went wild and even threatened to kill  Calder. Teresa (now) Lind filed  a $200,000 lawsuit against Calder for all the damages to her and her marriage.

Calder, on his part,  was also shocked, maintaining that neither the head nor the figure are associated with Theresa Lind.
I was not able to find any information about the end of the story, but am glad that nobody got killed, and hope that Therese Lind lived with her husband happily ever after,  and could appreciate the fact  that she became an inspiration for a beautiful piece of art.

In my "New York - Random Walk" blog there is a statue called "Abundance", featuring Audrey Munson - a model who inspired many  sculptors, including Alexander S. Calder. 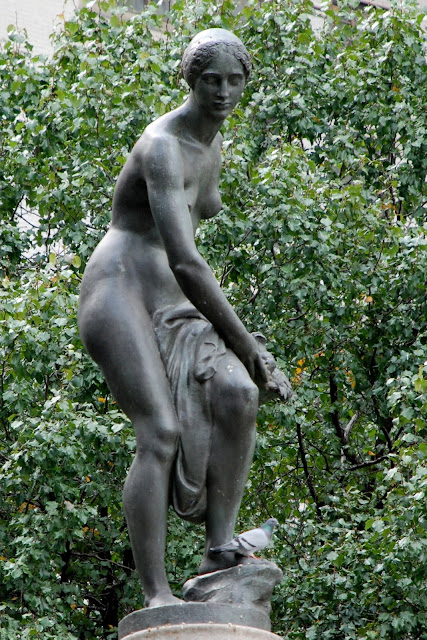 "Abundance" is  just one of many sculptures around New York City which Audrey Munson modeled for. Calder has chosen her as a model for multiple statues for Panama-Pacific fair in San Francisco in 1915, including the most famous Star Maiden. She posed for three quarters of the sculptures at this historical convention.  Then she went to Hollywood, and became the first actress appearing fully nude in a movie - a historical event by itself.

But her life was  surrounded by tragedies, and it was a very long life.

Karl Bitter, the sculptor who created "Abundance", was run over by a car just when he was about to finish his work.

After returning to New York  from Hollywood, she lived with her mother in an apartment. The landlord fell madly in love with Audrey, and murdered his wife  so he can marry her...

Bad publicity ended her career, she attempted suicide,  and finally ended up at age of 39 in a mental institution, where she lived for 65 years till her death at he age of 104 in 1996.
Here is a fragment of a documentary featuring Audrey Manson - link https://photos.app.goo.gl/7Psbv3kE7AmWF7Pm7

This 97 feet tall monument, dedicated to the victory at the Battle of Manila Bay during the Spanish war, stands proudly in the center of San Francisco downtown, on Union Square. 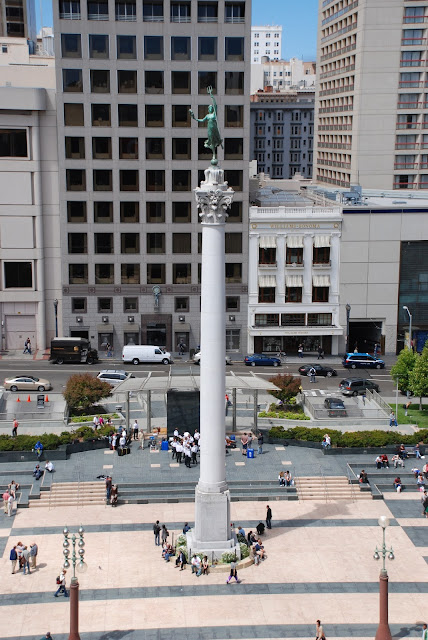 There is no luck of attention, but only the most curious,  big-eyed or those in possession of large lenses can appreciated the beauty and the fine features of the sculpture atop of the monument. 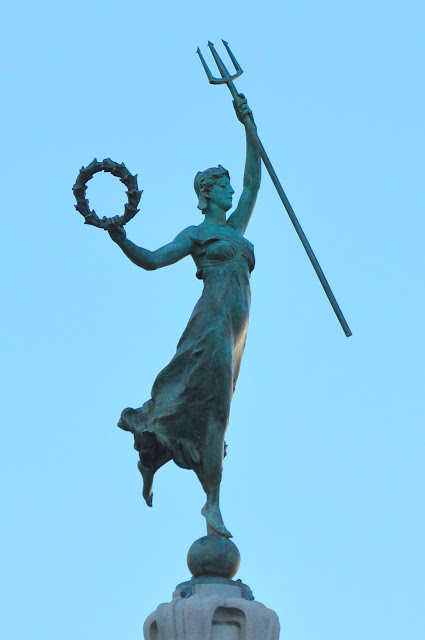 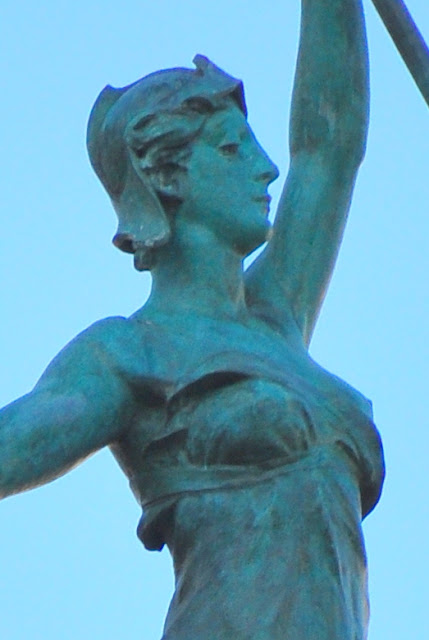 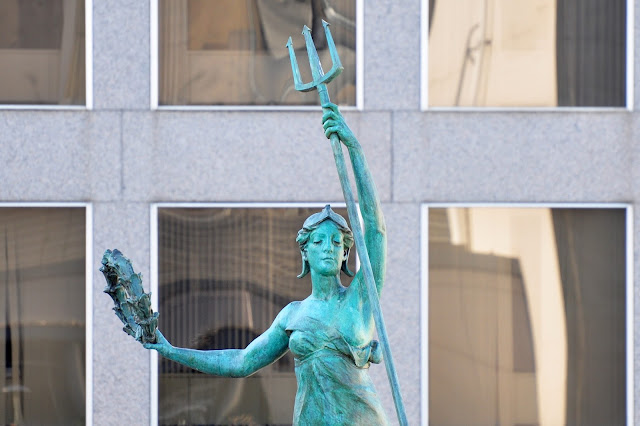 The model for the sculpture atop was Alma de Brettewille, a young art student, daughter of Danish immigrants. A rich "sugar baron" Adolph Spreckles, twice her age, fell in love with her, and, after five years of courtship, persuaded Alma to marry him in 1908. Alma Spreckles ( Big Alma - she was 6 feet tall, or "great grandmother of San Francisco") went on to become one of the wealthiest people in San Francisco, philanthropist, and  one of the most influential art collectors in US. She was an early collector of Rodin, and,  as  her art collection grew, she persuaded her husband to finance a new  museum, known now as  San Francisco Museum of Legions of Honor - a scale replica of Palais de la Légion d'Honneur in Paris. The museum is her true legacy, as it's location on the top of a hill with stunning views of San Francisco Bay, Golden Gate Bridge, and the Pacific Ocean rivals the content of the museum.

On a side note - there is a replica of the statue inside  Macy's department store across the street - almost true to the original, except for one little detail. 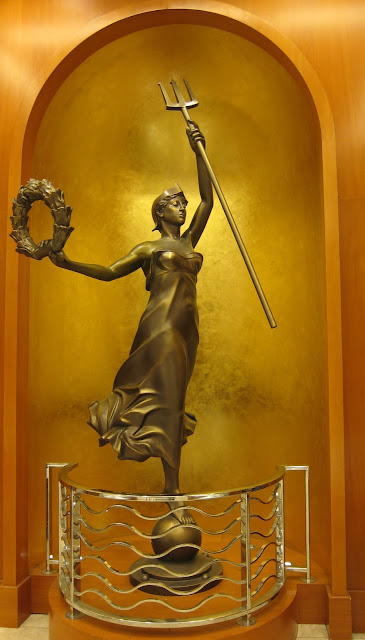 Why did they have to cover her breast - is hard to say. Probably whoever in charge thought that the original just had a wardrobe malfunction which  needed to be fixed. But there is very nice sculpture of Diana  in the nearby section, and she is  allowed to show off all her assets... 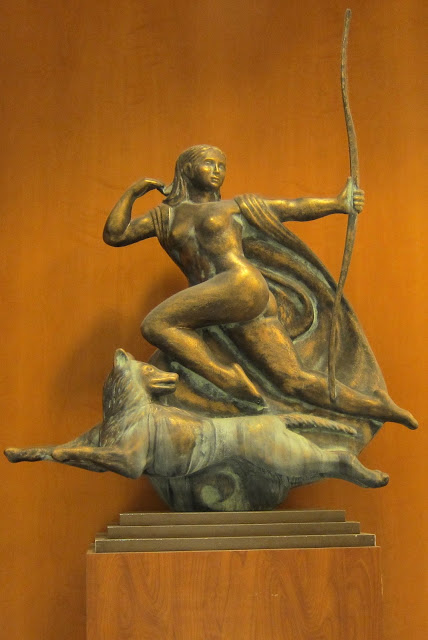 Click photos to enlarge
Posted by Art Gavin at 8:39 PM